Today, grapes are consumed primarily as fresh fruit, wine or juice. Grapes, however, have also been consumed as an herb for millennia. Recent findings that the berries, particularly their seeds, are a rich source of dietary polyphenols, led to a renaissance in the plant’s herbal use.

We are interested in polyphenol biosynthesis in the grape seed. Much is known about the accumulation of various phenylpropanoids in the berries of the cultivated grape species Vitis vinifera, as this species is by far the most dominant source of wine. Little is known, however, about how other grape species differ in the types and quantity of the various phenylpropanoid metabolites. We know, for example, that the grape variety Norton, a quintessential American grapevine (thought to be derived of Vitis aestivalis Michx.), accumulates many more types of anthocyanins in its berry skin than most red-fruited V. vinifera varieties (see figure below). 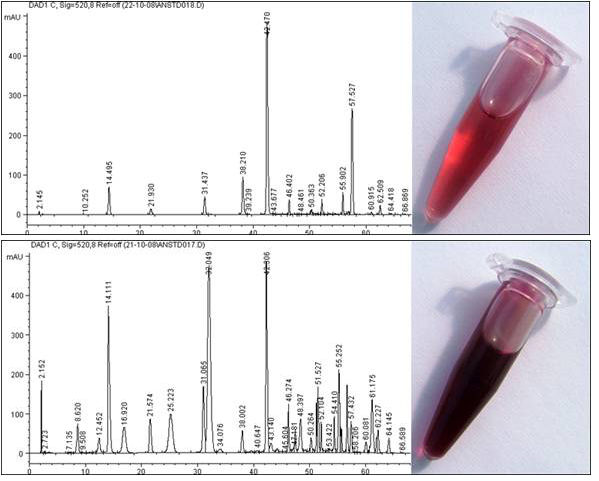 Grapevines are fascinating not only in their biology, but also in their role as economic plants that acquired great cultural significance throughout history. Their domestication dates back to at least 7,000 years ago, which makes them one of the oldest crops. Viticulture is most commonly associated with Mediterranean and European civilizations. Grape growing, however, also spread eastward along the Silk Road and became established China as early as during the Han Dynasty. Grape cultivation also flourished in the Islamic cultures of Central Asia where numerous table and raisin varieties have been developed over the centuries. Wild grapes were collected and consumed by Native Americans as evidenced by grape seed remnants ubiquitous at pre-historic dwelling sites in North America (Neal Lopinot, Center of Archaeological Research, Missouri State University). In ancient and medieval Europe, grapes were consumed also as an herb – an intriguing fact in light of recent findings that they contain high levels of bioactive polyphenols that are beneficial to human health. We are conducting research at the interface of mammalian cell physiology and plant science to determine which tissues of the grape berry are richest in polyphenols.