Nearly all varieties of Vitis vinifera are susceptible to PM. The evolutionary reason for this is that V. vinifera evolved in Eurasia in the absence of selection pressure from PM, which originates from the Americas. Intriguingly, however, a few Eurasian grapevine genotypes offer resistance to this pathogen. One of them is the East Asian species Vitis romanetii, which is used as a source of PM resistance in grape breeding programs.

Recently, we have begun studies on a V. vinifera variety which also has partial (but economically significant) level of resistance to PM. This variety, originally from Uzbekhistan, responds to PM infection with the discoloration of epidermal cells and, under certain conditions, the development of chlorotic areas of the leaf where the mildew attempts to grow. 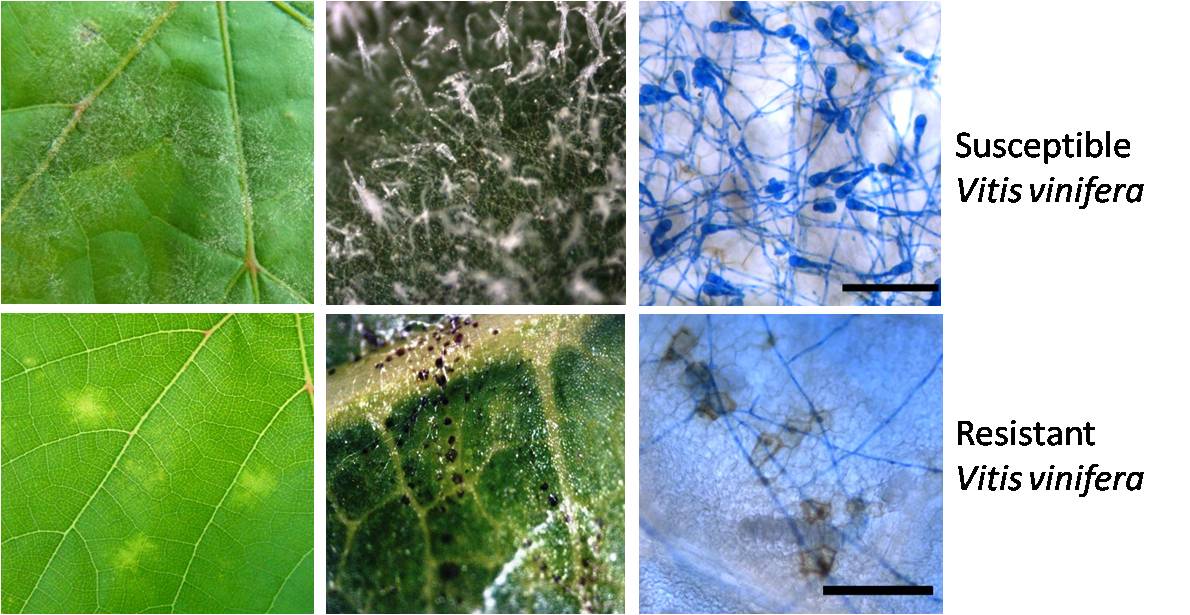 Figure: E. necator-induced symptoms in a susceptible (top) and a resistant (bottom) V. vinifera variety. Left and center panels: appearance of PM-infected leaves as observed with the unaided eye and through a stereomicroscope. Note the chlorotic areas and their association with sparse hyphal growth and dark epidermal cells in the resistant variety (Kishmish vatkana). Right panel: Aniline blue-stained fungal structures as observed under a compound microscope. Note the profuse and sparse fungal growth on the susceptible and resistant genotype, respectively, and the frequent association of the brown epidermal cells with the appressoria of the pathogen in the latter. Scale bar: 100 μm.

Segregation and positional cloning studies conducted at the University of Pecs in Hungary, and the University of Udine in Italy identified the genetic determinant of this resistance, named REN1, as a single dominant locus and localized it to chromosome 13 (Hoffmann et al., 2008). Currently, efforts are being made to fine-map the location of the gene that confers this resistance. The markers used in this mapping work are based on microsatellites. Microsatellite markers generated for REN1 mapping can also be used to introgress the locus into hybrid grapevines using marker-assisted selection. This breeding method will enable us to combine REN1 with several other resistance genes which direct different defense mechanisms to fend off the PM fungus. This approach, referred to as gene pyramiding, leads to hybrid grapes whose resistance is durable. REN1 is particularly valuable for breeding, because it is from a V. vinifera genotype, and its introduction to cultivated grapes will not result in linkage drag of undesired non-vinifera characteristics.